HEME BIOSYNTHESIS
Besides detoxifying the heme that comes from the host hemoglobin degradation, Plasmodium falciparum also synthesizes its very own heme. Heme is a vital prosthetic institution in various proteins which includes cytochromes. It’s been showed that the heme biosynthetic pathway found in P. falciparum is shared amongst apicoplast, mitochondrion and cytosol of the parasite. Because there's an overlap between the mammalian and the parasitic enzymes involved inside the heme biosynthetic pathway, those enzymes which can be of endosymbiosis origin are thought to be expedient to target (Wiley et al., 2015). Heme synthesis pathway in the mitochondria of malaria parasite starts with the synthesis of aminolaevulinic acid (δ-ALA) from glycine and succinyl-CoA that is catalyzed by ALA synthase. After the synthesis of ALA in the mitochondrion, heme biosynthetic pathway relocates itself to the apicoplast which contains enzymes like, δ-aminolaevulinate dehydratase (Hem B), porphobilinogen deaminase (Hem C) and uroporphyrinogen III decarboxylase (Hem E). Ferrochelatase (Hem H) is the closing enzyme inside the heme biosynthetic pathway which is positioned within the mitochondrion (Mailu et al., 2015). It’s far liable for insertion of ferrous iron into the protoporpherin IX 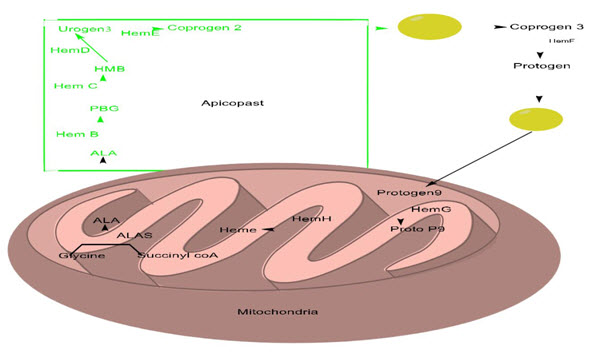 B.1 INHIBITORS OF HEME BIOSYNTHESIS
There are different types of inhibitors of heme biosynthesis are discovered till now. Some of these inhibitors along with their mechanism of action is given in the table below

C. ISOPRENOID BIOSYNTHESIS
Isoprenoid biosynthesis pathway is one of the pathways in malaria parasite which comprise enzymes which can be determined in multiple compartment to supply its final merchandise i.e. isoprenoids. Isoprenoids are the various variety of compounds which are assembled from two common 5-carbon precursors referred to as isopentenyl pyrophosphate (IPP) and dimethyl-allyl diphosphate (DMAPP) (Jomaa et al., 1999). Some of the normally recognized isoprenoids are (i) steroids which can be worried inside the membrane structure, (ii) heme A and ubiquinone which might be believed to have significant contribution in the electron delivery, (iii) dolichol that is required for glycoprotein synthesis, and (iv) isopentyladenine that is found in some tRNAs. In mammals, isoprene units are acquired from the standard mevalonate pathway. In apicomplexa, the methyl erythritol phosphate (MEP) pathway or 1-deoxy-D-xylulose 5-phosphate (DOXP) pathway produces IPP and DMAPP. This pathway depends on the condensation of 3 molecules of acetyl CoA (coenzyme A) into HMG-CoA (3-hydroxy-three-methylglutaryl coenzyme A) that is reduced to mevalonate by using HMG-CoA reductase. Mevalonate is then transformed into IPP with mevalonate 5-phosphate as an intermediate. An important difference between cytoplasmic acetate/mevalonate pathway and the plastid DOXP pathway is that the previous uses starting compounds of two-carbon constructing blocks but the latter uses each -carbon in addition to three-carbon constructing blocks (Ralph, D'Ombrain, & McFadden, 2001). In apicoplast, triose phosphate importers along with the following enhancing enzymes generate pyruvate alongside glyceraldehydes-3-phosphate (GA3P) that are used by the first enzyme of the DOXP pathway, DOXP synthase (DXS). DXS condenses pyruvate and GA3P to DOXP. DOXP reductoisomerase (DXR) is then catalyzes the intermolecular rearrangement and reduction of DOXP to MEP. Subsequent reactions which contain different enzymes convert MEP to IPP and DMAPP which can be used as an intermediate in the production of isoprenoids which include dolichol and ubiquinones. After their cargo to cytoplasm, IPP and DMAPP are then condensed to GPP (geranyl diphosphate) by means of the enzyme FPPS (farnesyl diphosphate synthase). GPP is then condensed with the second one molecule of IPP to form FPP (farnesyl diphosphate). Sooner or later, FPP is transformed to GGPP (geranylgeranyl diphosphate) via GGPPS (geranylgeranyl diphosphate synthase) (Goodman, Su, & McFadden, 2007). 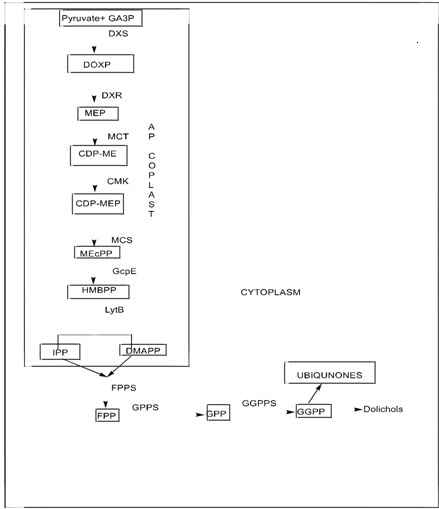 C.1 INHIBITORS OF ISOPRENOID BIOSYNTHESIS
Drugs involved in the inhibition of the malarial parasite’s isoprenoid biosynthesis are given in the table below: 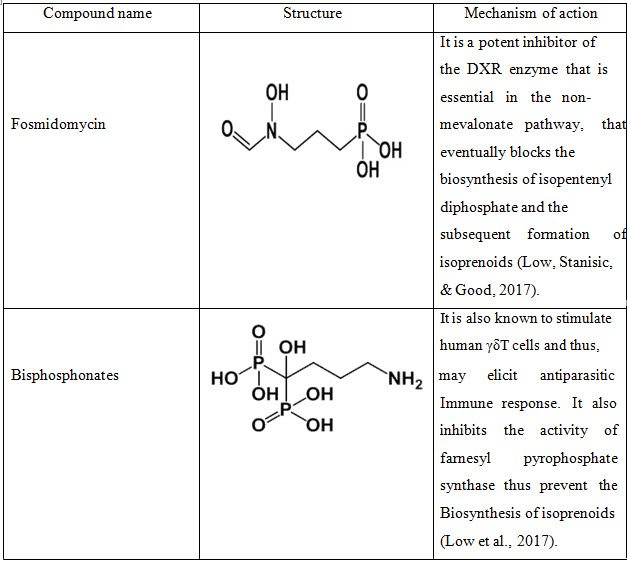 RESEARCH PIPELINE DRUGS
The name of the drugs which can be used as combination therapy against malaria are listed in the table given below: 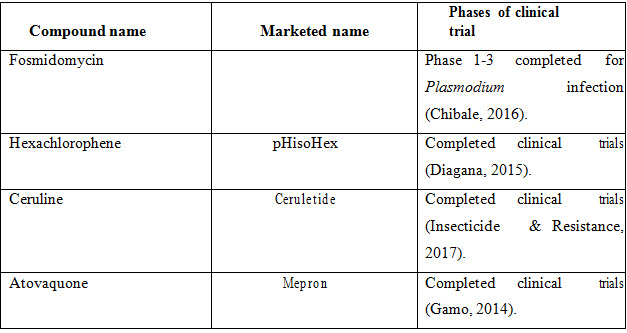