Similarity in damage due to Alzheimer's Disease in Twins

Researchers found that twin pairs had similar progressions of Alzheimer’s Disease (AD) and dementia prior to death and even they also had similar combinations of pathogenesis in two or more unconnected areas of damage to the brain. This unique study was conducted by international team of researchers led by USC psychologist Margaret Gatz. 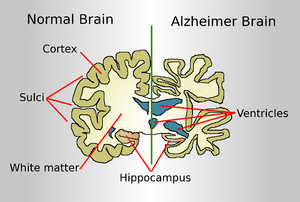 They studied more than 14000 twins, recorded in Swedish Twin Registry, over the age of 65. And Gatz studied twins for more than 30 years for their entire life span, including the effects of developmental exposure, periodontal disease, mental health, obesity and diabetes on later-life Alzheimer’s risk. This paper published in current issue of "Brain Pathology".

“We try to make inferences based on tests and diagnoses, but we have to assume that what we’re seeing is a manifestation of what’s going on in these twins’ brains,” said Gatz, professor of psychology, gerontology and preventive medicine at the USC Dornsife College of Letters, Arts and Sciences. “For this reason, we wanted to compare the brains of twins to ask whether identical twins’ brains are actually more identical.”

The researchers got opportunity to perform direct autopsy in seven pairs of brain where one or both died of AD.

“There may be risk factors that start to accumulate but don’t lead to a clinical diagnosis,” described lead author Diego Iacono of the Karolinska Institute in Sweden and the Biomedical Research Institute of New Jersey and Atlantic Health System in news release.