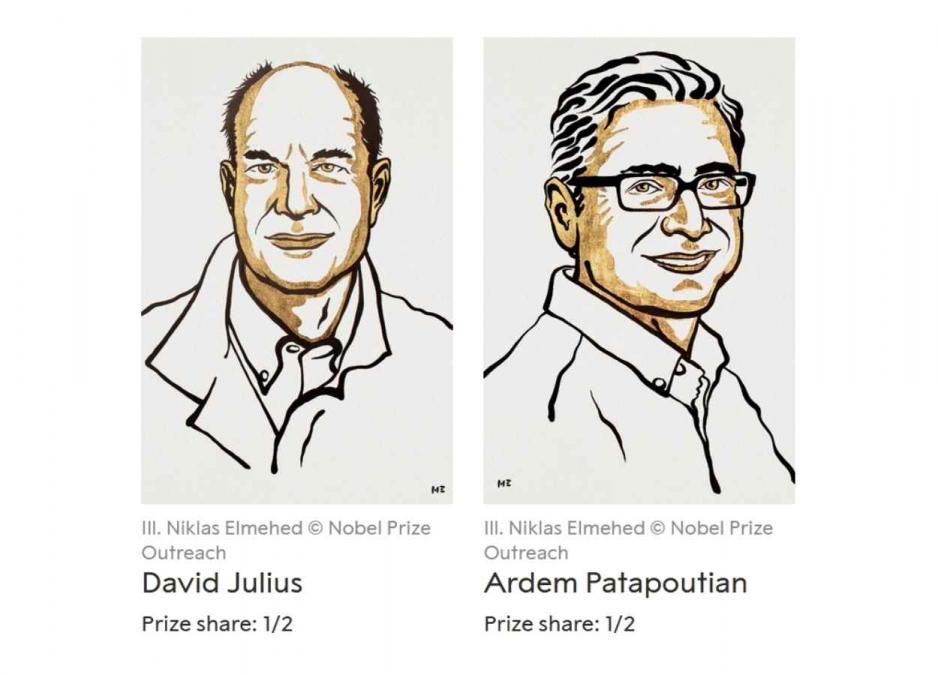 How do we perceive the world?
One of the great mysteries facing humanity is the question of how we sense our environment. The mechanisms underlying our senses have triggered our curiosity for thousands of years, for example, how light is detected by the eyes, how sound waves affect our inner ears, and how different chemical compounds interact with receptors in our nose and mouth generating smell and taste. We also have other ways to perceive the world around us. Imagine walking barefoot across a lawn on a hot summers day. You can feel the heat of the sun, the caress of the wind, and the individual blades of grass underneath your feet. These impressions of temperature, touch and movement are essential for our adaptation to the constantly changing surrounding.

In the 17th century, the philosopher Rene Descartes envisioned threads connecting different parts of the skin with the brain. In this way, a foot touching an open flame would send a mechanical signal to the brain (Figure 1). Discoveries later revealed the existence of specialized sensory neurons that register changes in our environment. Joseph Erlanger and Herbert Gasser received the Nobel Prize in Physiology or Medicine in 1944 for their discovery of different types of sensory nerve fibers that react to distinct stimuli, for example, in the responses to painful and non-painful touch. Since then, it has been demonstrated that nerve cells are highly specialized for detecting and transducing differing types of stimuli, allowing a nuanced perception of our surroundings; for example, our capacity to feel differences in the texture of surfaces through our fingertips, or our ability to discern both pleasing warmth, and painful heat.

Prior to the discoveries of David Julius and Ardem Patapoutian, our understanding of how the nervous system senses and interprets our environment still contained a fundamental unsolved question: how are temperature and mechanical stimuli converted into electrical impulses in the nervous system? 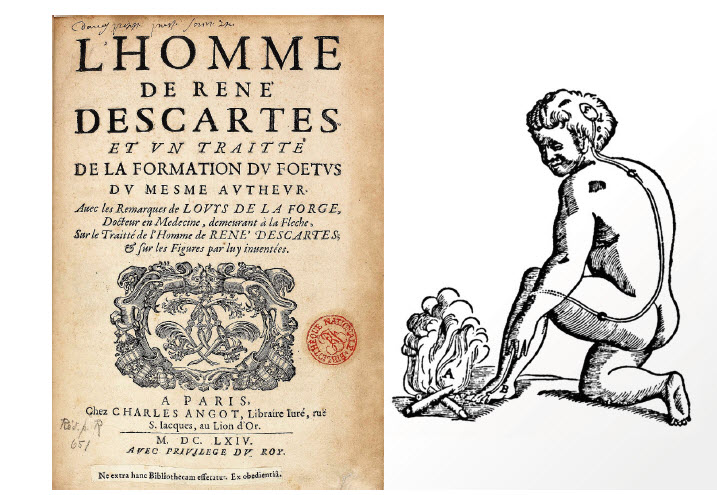 The science heats up!
In the latter part of the 1990s, David Julius at the University of California, San Francisco, USA, saw the possibility for major advances by analyzing how the chemical compound capsaicin causes the burning sensation we feel when we come into contact with chili peppers. Capsaicin was already known to activate nerve cells causing pain sensations, but how this chemical actually exerted this function was an unsolved riddle. Julius and his coworkers created a library of millions of DNA fragments corresponding to genes that are expressed in the sensory neurons which can react to pain, heat, and touch. Julius and colleagues hypothesized that the library would include a DNA fragment encoding the protein capable of reacting to capsaicin. They expressed individual genes from this collection in cultured cells that normally do not react to capsaicin. After a laborious search, a single gene was identified that was able to make cells capsaicin sensitive (Figure 2). The gene for capsaicin sensing had been found! Further experiments revealed that the identified gene encoded a novel ion channel protein and this newly discovered capsaicin receptor was later named TRPV1. When Julius investigated the protein’s ability to respond to heat, he realized that he had discovered a heat-sensing receptor that is activated at temperatures perceived as painful (Figure 2).

The discovery of TRPV1 was a major breakthrough leading the way to the unravelling of additional temperature-sensing receptors. Independently of one another, both David Julius and Ardem Patapoutian used the chemical substance menthol to identify TRPM8, a receptor that was shown to be activated by cold. Additional ion channels related to TRPV1 and TRPM8 were identified and found to be activated by a range of different temperatures. Many laboratories pursued research programs to investigate the roles of these channels in thermal sensation by using genetically manipulated mice that lacked these newly discovered genes. David Julius’ discovery of TRPV1 was the breakthrough that allowed us to understand how differences in temperature can induce electrical signals in the nervous system.

Research under pressure!
While the mechanisms for temperature sensation were unfolding, it remained unclear how mechanical stimuli could be converted into our senses of touch and pressure. Researchers had previously found mechanical sensors in bacteria, but the mechanisms underlying touch 4 in vertebrates remained unknown. Ardem Patapoutian, working at Scripps Research in La Jolla, California, USA, wished to identify the elusive receptors that are activated by mechanical stimuli.

Patapoutian and his collaborators first identified a cell line that gave off a measurable electric signal when individual cells were poked with a micropipette. It was assumed that the receptor activated by mechanical force is an ion channel and in a next step 72 candidate genes encoding possible receptors were identified. These genes were inactivated one by one to discover the gene responsible for mechanosensitivity in the studied cells. After an arduous search, Patapoutian and his co-workers succeeded in identifying a single gene whose silencing rendered the cells insensitive to poking with the micropipette. A new and entirely unknown mechanosensitive ion channel had been discovered and was given the name Piezo1, after the Greek word for pressure (píesh; píesi). Through its similarity to Piezo1, a second gene was discovered and named Piezo2. Sensory neurons were found to express high levels of Piezo2 and further studies firmly established that Piezo1 and Piezo2 are ion channels that are directly activated by the exertion of pressure on cell membranes (Figure 3). 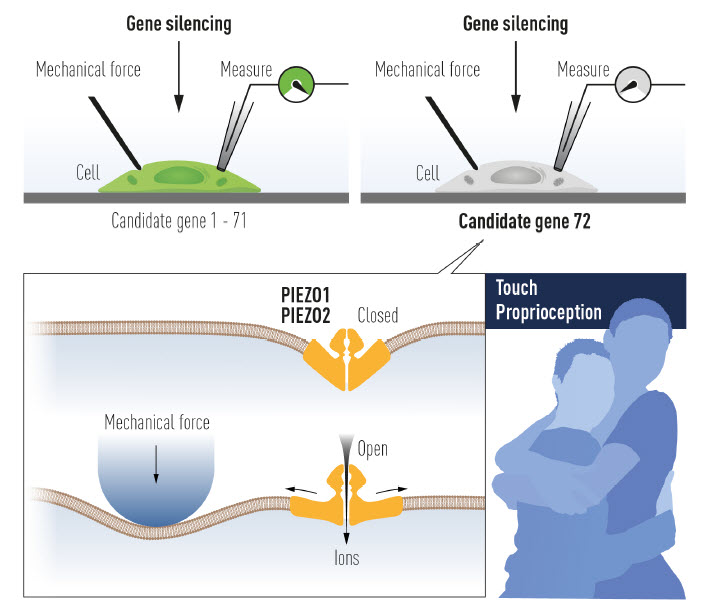 Figure 3 Patapoutian used cultured mechanosensitive cells to identify an ion channel activated by mechanical force. After painstaking work, Piezo1 was identified. Based on its similarity to Piezo1, a second ion channel was found (Piezo2).

The breakthrough by Patapoutian led to a series of papers from his and other groups, demonstrating that the Piezo2 ion channel is essential for the sense of touch. Moreover, Piezo2 was shown to play a key role in the critically important sensing of body position and motion, known as proprioception. In further work, Piezo1 and Piezo2 channels have been 5 shown to regulate additional important physiological processes including blood pressure, respiration and urinary bladder control.

It all makes sense!
The groundbreaking discoveries of the TRPV1, TRPM8 and Piezo channels by this year’s Nobel Laureates have allowed us to understand how heat, cold and mechanical force can initiate the nerve impulses that allow us to perceive and adapt to the world around us. The TRP channels are central for our ability to perceive temperature. The Piezo2 channel endows us with the sense of touch and the ability to feel the position and movement of our body parts. TRP and Piezo channels also contribute to numerous additional physiological functions that depend on sensing temperature or mechanical stimuli. Intensive ongoing research originating from this year’s Nobel Prize awarded discoveries focusses on elucidating their functions in a variety of physiological processes. This knowledge is being used to develop treatments for a wide range of disease conditions, including chronic pain (Figure 4). 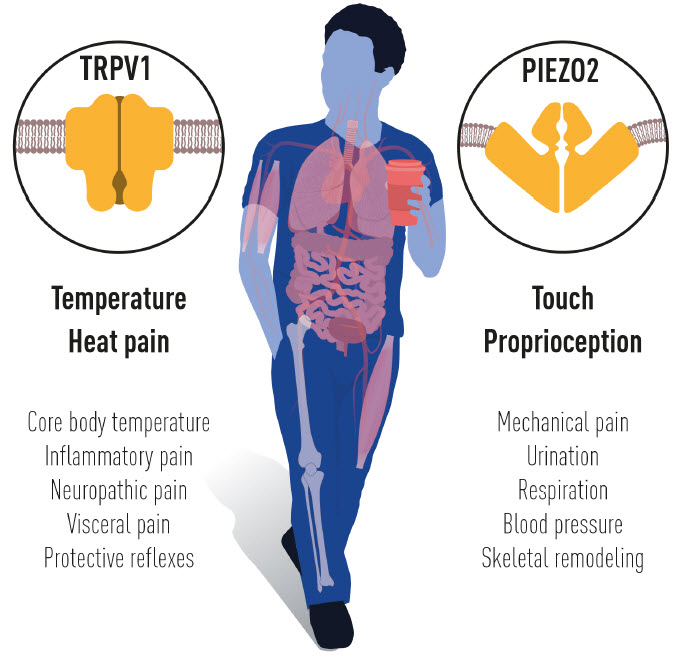