REVIEW ARTICLE ON: SYNTHESIS AND BIOLOGICAL ACTIVITIES OF ALLYL SULFIDES

ABSTRACT
The current review frameworks different approaches of synthesis and various biological activities of allyl sulfides. The food-based natural products (allyl sulfides) are major organo-sulfur constituent of garlic had been studied extensively due to their moderate toxicity accompanied by number of biological applications such as anti-cancer, anti-microbial, antibiotic, antimutagenic and detoxification etc. The broad-spectrum application of allyl sulfides inspires us to do advance research on it.

Grayson et al., 2016 reported synthesis of optically active sulfides (3) by carried out conjugate addition between thiols and various α,β-unsaturated in the presence of urea organocatalyst derived from cinchona alkaloid.

Mohammadi and Beigi 2016 proposed simple and green method for synthesis of symmetrical trisulfides (4) from alkyl halides in water and using PMoxt as a sulfur donor.

Oueslati et al., 2016 reported a direct route for synthesis of allyl sulfides (5) using cyclic p-TsOH-mediated followed by the direct α-substitution of cyclic Morita–Baylis–Hillman alcohols with aliphatic and aromatic thiols in refluxing THF. The reaction proceeded with complete α-regioselectivity and provided the corresponding allyl sulfides in moderate to good yields.

Abbasi et al., 2016 reported synthesis of symmetrical disulfides (8) by reacting organic halides and Na2SO3 in DMSO at 60-70ºC. The progress of the reaction checked by litmus paper, the color of litmus paper changed from yellow to red which indicated formation of product.

Gosh et al., 2015 reported a convenient method for the synthesis of aryl methyl sulfides (9) via cu (I)-mediated methylthiolation of haloarenes with DMSO which act source of sulphur.

A new solvent and catalyst free approach of synthesis of disulfides (10) reported by Tabarelli et al., 2014. Prior to the synthesis 1,3-diphenylprop-2-en-1-ol and benzenethiol were made to react in the absence of solvent and catalyst followed by microwave irradiations for 20min. The reaction was very sensitive towards temperature change.

Wang et al., 2013 synthesized diallyl polysulfanes (12) by treatment of diallyl disulfide and liquid sulphur at 120ºC resulted into families of polysulfanes with up to 22 sequential sulphur atoms. The resulted product characterized by ultra-performance liquid chromatography and obtained in good yield.

Nishimoto et al., 2012 reported an efficient method for synthesis of allyl sulfides (13) via substitution of the acetoxy group in alkyl, benzyl, allyl, and propargyl acetates with thiosilanes in the presence of indium triiodide as catalyst. The product was obtained in good yield.

Bahrami et al., 2011 proposed efficient synthesis of allyl sulfides (14) using TAPC as catalyst by reaction of benzylic alcohols with aryl, heteroaryl, and alkyl thiols under metal-free and solvent-free conditions. The products were obtained in good yield and were characterized by spectrometric techniques.

Qiao et al., 2011 proposed efficient synthesis of aryl methyl sulfide (18) by carried out methylthiolation using (methylthio)trimethylsilan. To a solution of 1-iodo-3,5-dinitrobenzene in DMSO was added Cs2CO3 and followed by stirring for 2 min. A dark purple solution obtained and TMSSMe was added.

et al., 2010 reported synthesis of unsymmetrical trisulfides (19) followed by treatment of SCl2 with mixture of dodecane-1-thiol and 5,5-dimethyl-2-sulfanyl-2-thioxo-1,3,2-dioxaphosphorinane at 30°C and resulting intermediate 1-[(5,5-dimethyl-2-thioxo-1,3,2-dioxaphosphorinan-2-yl)-trisulfanyl]dodecane11-sulfanylundecanol. The intermediate further afforded a complex mixture of product such as unsymmetrical and symmetrical trisulfides on treatment with Et3N. 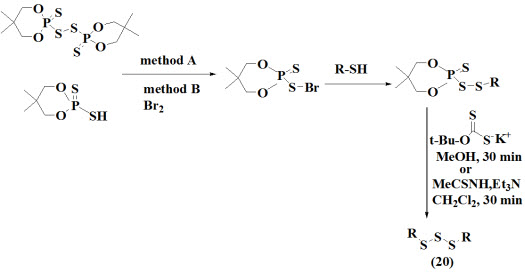