INTRODUCTION:
Inflammation is a protective response by the body towards cell injury. Cell injury may be due to; necrotic cells or tissue, the introduction of microbes (such as viruses or bacteria), toxins, hypoxia, etc. Inflammation is therefore the body’s way of attempting to remove the primary cause of inflammation and any damage that may have occurred as a result (Healing and repair). However if inflammation did not occur, then the body would be unable to deal with wounds and infections letting them go unchecked and progressively destroy the tissue. All injured organs would therefore be unable to regain function, eventually leading to mortality.
Acute inflammation is usually of sudden onset and short duration following the injury of tissues. The damage may be purely physical, or it may involve the activation of an immune response. Three main processes occur:
• Increased blood flow due to dilation of blood vessels (arterioles) supplying the region
• Increased permeability of the capillaries, allowing fluid and blood proteins to move into the inters space
• Migration of neutrophils and perhaps a few macrophages) out of the venules and into interstitial spaces.
It is also important to remember that chronic inflammation may pose problems to the body; these may be hypersensitivity reactions, autoimmune reactions or organ dysfunction due to the formation of scars/obstructions caused by fibrosis e.g. hay fever (hypersensitivity) or arthritis (autoimmune response) (Kareru PG et.al., 2006).

Materials and Methods:
Collection and preparation of plant materials:
Pentas lanceolata, commonly known as Egyptian Starcluster, is a species of flowering plant in the madder family, Rubiaceae that is native to much of Africa as well as Yemen. It is known for its wide use as a garden plant where it often accompanies butterfly gardens. These leaves are collected from B V Raju institute of technology, Narsapur, Telangana, India. 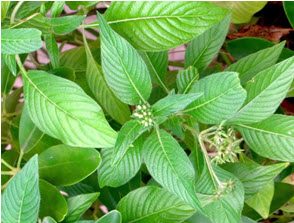 It is a many-branched, somewhat sprawling plant that features 4” wide rounded clusters (corymbs) of star-shaped flowers over a long summer to frost bloom. Elliptic to lanceolata dark green leaves (to 6” long). Flowers are pink, magenta, lilac or less commonly white.
• It is used to anti-bacterial; anti-fungal activity had been reported and also used in beds and borders of garden, containers, and houseplant. Also may be effectively gown indoors under artificial lights.
• Solvents used:
Petroleum ether was used for soxhlation process.

• Extraction:
The leaves of Pentas lanceolata were subjected to fine powder and 1 kg were subjected to continuous successive extraction with solvent petroleum ether in soxhlet extractor. After complete extraction, the solvent (petroleum) was concentrated to water bath and finally dried under reduced pressure to the dryness in rotary evaporator. After drying the respective extract was weighed. (Kamau JK et.al., 2016), (Suman D et.al .,2014)
• Experimental Section

• Animals
Wister albino mice of either sex (weighing 20 - 25g), were bred and kept in cages under standard environmental conditions in the animal house of the VIPER. Experimental protocol was subjected to the scrutiny of the Institutional Animal Ethical Committee and was cleared by the same before starting.    The experimental animals were kept in the standard cages in the animal house maintained under standard laboratory condition of an ambient temperature of 25°C with 12 hours daylight and 12 hours darkness cycles. They were fed with standard animal pellets and water a libitum. The study protocol was approved by Institutional Animal Ethics Committee no: 1358/ac/10/CPCSEA.

• Preparation of extract
The leaves were cleaned and dried under shade and reduced to powder using mortar and pestle, and stored in air tight containers until use. The powdered plant leaves were soxhlet extracted using Petroleum ether.  The  resultant  extracts  were  filtered  and  evaporated  to  dryness on  steam bath at a temperature  of  80C. The dried extract was weighed; the percentage yield was determined and it was preserved in the refrigerator until use. (Vishwanadham Y et.al., 2016)
Acute Toxicity Testing the LD50 values of the extract were determined in mice following intraperitoneal administration as described by Lorke. (Hurley JV, 1972) (Williams JG and Maier RV 1992), (OECD /OCDE, 2001).

This design is summarized in Table 1

Acute inflammation was induced by injecting egg albumin  into  the  sub-  planter  surface  of  the  rat  hind  paw  linear  circumference,  oedema  was assessed  in  terms  of  difference  in  zero  time  linear   circumference  at  the  injected  paw  and  it circumference at 30 minutes interval after egg albumin injection. (Posadas I et.al.,2004) (Tilley SL et.al., 2001), Traversa G et.al., 1995).

The percentages inhibition in inflammation was calculated using the formula;
Inhibition % =Ct – Tt /Ct × 100 Where,

•   Phytochemical Screening of the Plants;
The method described by Trease and Evans were used to chemically analyze the extract for the presence of alkaloids, terpenoids, saponins, flavonoids, cardiac glycosides and steroids.

•   Statistical Analysis;
The  group  means  ±  SEM  was  calculated  for  each  analyte  and  reported.  Significant  differences between  means  were  evaluated  by  one  way  analysis  of  variance  (ANOVA).  Post hoc test analysis was done using Dunne test with SPSS version 16.0 package. Value of P < 0.05 was considered as statistically significant. (Anova, 2000), (Dunnet CW,1964)

The anti-inflammatory activity of the extract at the dose levels of 50 mg/kg, 100 mg/kg and 200 mg/kg body weight showed no significant difference and were comparable to normal control.

In the second hour, the leaf extract of pentas lanceolata at the dose of 100 mg/kg and 200 mg/kg weight also as the diclofenac (standard drug) reduced inflamed paw diameter by 0.40%, 1.99% and 2.20% respectively. However, the pet.ether extract at the dose of 50 mg/kg weight never showed anti-inflammatory activity at this second hour.

The anti-inflammatory activity of the extract at the dose of 50 mg/kg and 100 mg/kg and 200 mg/kg weight showed no important difference and were similar to diclofenac (standard drug). 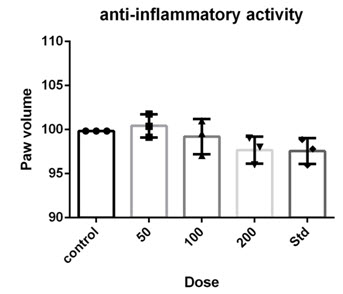 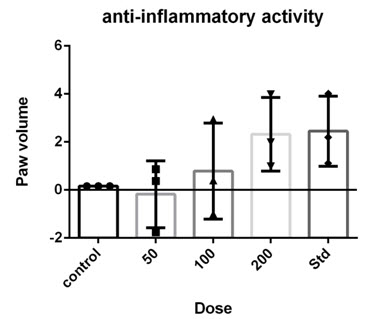 Table 3:  Phytochemical composition of Pet.ether leaf extract of Pentas lanceolata. Present phytochemical is denoted by (+) sign; absent phytochemical is indicated by (-) sign.
The above result therefore supports their use by traditional healers for various forms of pains and inflammatory conditions such as arthritis and rheumatism.

CONCLUSIONS:
The Pet.ether leaf extract of Pentas lanceolata showed potent anti-inflammatory activity on albumen induced paw oedema in mice. The anti-inflammatory activity of leaf extracts of Pentas lanceolata incontestible a dose-dependent response and was similar to diclofenac (standard drug). The extracts were most active at the dose level of 200 mg/kg weight within the fourth hour of treatment.