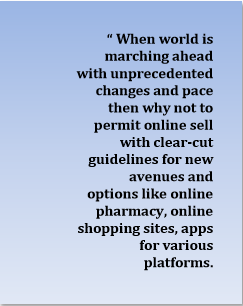 The recent and hottest example is of Snapdeal, an online marketplace, New Delhi, India. It was selling medicines online, until Food and Drug Administration (FDA) team in Mumbai raided its Mumbai premises at Goregaon for allegedly selling illegal and restricted drugs. Reason behind this raid was selling of these medicines without prescriptions. As per the information mentioned on http://trak.in/tags/business/2015/04/18, FDA authorities had received complaints that Snapdeal is selling drugs such as Ascoril cough syrup and Vigora tablets on its online shopping store. Other online shopping websites might also be selling medicines or some other stuff like sexual wellness products in certain states. There are few apps also for home delivery of medicines. As per FDA, Drugs and Cosmetics Act 1940, only licensed pharmacists can dispense/sell medicines in India after prescription being tendered to him.

Now questions are: How long authorities will restrain the concept of online pharmacy? Is it really justified? Is it high time to give green signal to such concept? Has pharmacist in India power to change the drug or brand for a particular product mentioned by the doctor? Have pharmacist in India rights to prescribe medicines? I am not commenting on these; rather leaving up to you to decide.

Most important point, clear to most of the stake holder, is medicines and surgical goods are among those goods which have highest profit. Why is it so? Is it because of the fact that medicines are directly proportional to lives or vice versa? Let me further elaborate. This profit is whopping when it comes to critical segment like cardio, metabolic disorders, ailments of CNS and Urinary system. Cosmetic stuff or more precisely dermatological medicines are also exorbitant. Is it because skin is the first organ onlookers and beholders see?

Coming back to title of the article. Online pharmacy and online shopping sites offer some discounts, which may not be a welcome move from view point of brick and cement stores (nearby medical shops). Discounted medical shops and home delivery by few medical shops is recently a new concept and it has been taken hand to hand by customers. For instance if I talk about my city Indore, the industrial capital of Madhya Pradesh, there is a fabulous concept launched by managing director K. P. Singh (Oxygen Life Care) led organization, which is supported by Red Cross Society and approved by Local administration of Indore. The shop is being run under the“ When world is marching ahead with unprecedented changes and pace then why not to permit online sell with clear-cut guidelines for new avenues and options like online pharmacy, online shopping sites, apps for various platforms.  PPP mode and was opened under the ‘Arogya’ scheme of the central government. Around twenty five shops are going to be opened in Indore and nearby regions. These are called discounted Arogya Medical Shops. These shops offer heavy discounts (20 to 75 %), something which has never been seen or heard of by Indore’s citizens. As expected other retailers opposed this move because these shops are offering such a big discount and news was also that Indore’s wholesale medicine market did not supply medicines to these shops. Nonetheless, Singh is managing his initial shop (others are in pipeline) with certain hitches, thanks to opposition and boycott from lobby. 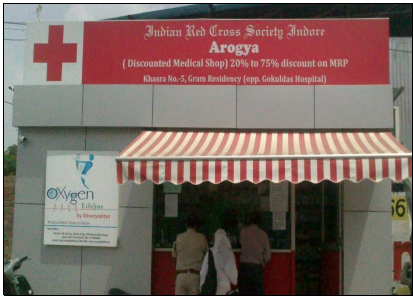 What is wrong if somebody sell medicines at reduced MRP? Anybody can do it, looking at huge and beyond imagination profit. Here I am not going in many details like highest percent on most of the generic versions, followed by surgical and ethical goods. When world is marching ahead with unprecedented changes and pace then why not to permit online sell with clear-cut guidelines for new avenues and options like online pharmacy, online shopping sites, apps for various platforms. Here it is also important to know authorities are taking actions on their own or after receiving complaints from others who are much worried about the profession and follows all the rules (?) and not selling drugs online and or with a price less than MRP.  Sooner or later authorities have to lax the norms and rules for the larger benefits of patients. Android based applications and other platforms applications have shortened the world. In such scenario this is not a welcome move, in my opinion. People are committing suicides using pesticides etc. Nitrazepam, illicit liquor and poisonous mid-day meal are killing people. These are more serious issues and threats for society. Important point is that government should find a way to allow selling of online drugs without very strict rules, because those who are selling drugs without prescription, are among those who are opposing the sell of online drugs, home delivery of medicines or more exactly, discounted medicines. Authorities should also look into why lobby or association does not supply medicines to those who are doing better for society. This is especially mentioned here, because most of the drug stores don’t encourage patients to purchase cheaper version of branded products either because of poor technical knowledge or some other reasons. Though Govt. of India’s scheme of Jan Aushadi Shops met a major failure because most of the doctors don’t prescribe name of drug molecule, instead they prescribe brand names (for the reasons known to everybody); might be possible in coming years corporate houses (pharmaceutical manufactures) will float their own exclusive online medical shops. Why government is not making it compulsory for all the doctors to write only drug molecules names and leave it on the patients to choose the brand they want? Time to think. To further have insight and interest in the story, just visit https://www.quora.com/Why-isnt-there-any-major-online-pharmacy-in-India.

I am not in favour or against any of the shops or online shopping sites. I am just in favour of patients, especially poor patients.

Author is a creative, content and copy writer. He writes extensively on brand and branding strategies besides being a futuristic commentator. He is also engaged in training and empowering budding professional and businessmen, through his “Take revenge with failure” session.