ABSTRACT
“Green tea in green world” it means that healthy green tea in healthy world. As we know when leaves are in green color they are considered as they are fresh and healthy to use. Tea, it is present in two forms that is green or black tea, it is consumed most widely in the world. Extracts of tea leaves it is supplied in the dietary supplements which will maintain the health. However, this review shows an interest in the health care properties of green tea which will help in treatment of cancer which is more dangerous cannot be cure easily. The comparison between black and green tea is given which will help to make a choice. Green tea contains catechins which is an important chemical constituents it shows biological activity like antioxidant, anti-angiogenesis, and anti-proliferative effects and also in treatment of various forms of cancer. This review has much more focus on the biological properties like catechin, epigallocatechingallate (EGCg) show effects on antitumor properties and other health benefits. The antioxidant properties of green are responsible to improvement in cardiac health, atherosclerosis and it has powerful effects on the body. Catechins may reduce cholesterol levels in blood and also improve brain function. The studies show that when caffeine and L-theanine have synergistic effects. Green tea shows fat oxidation about increased by 17%. Green tea contains approximately 20-40% polyphenols and 60-80% catechins such as EGCG by weight. Synergistic properties of polyphenolicconstituents are increasing now a day that are important in medicinal benefits. Tea is now finding its way into topical preparations like patches. The uses of green tea are clinically proved.

INTRODUCTION
Green tea it is of fresh or dried leaves of Camellia sinensisthis nameis derived from Latinized name which belongs to family Theaceaethat have not undergone withering and oxidation process used to make oolong and black tea. Green tea originated in China, but its production has spread in many countries like Asia. (Crespy et al., 2004) It results in the preservation of the color& act as antioxidants when taken in high concentration (Chow et al., 2003). The brands are used like GNC herbal plus, Typhoo,Tetley, Happy valley, Lipton which more used for lowering the risk of fats. The classification of green tea is given below

Green tea was first steeped in 2737 BC during the reign of Emperor Shennong – a mythical sage and it has become popular mythology of Chinese agriculture and medicine. (Hong et al., 2002)
It is said that during one of his travels, shennong and his member got tried so, they decided to stop and take a rest, few tea leaves fell into his cup of hot water from a burning tea twig that lay nearby. The water turned dark in color, but it was unnoticed by the emperor, without noticing they had that hot water containing tea leaves. When he consumed this water, he found it to be extremely refreshing and requested the members of this convoy to prepare once again. (Emily et al., 2012)
This event was an important in the history of teas, especially the history of Green tea, since this was first recorded instance of tea being brewed and consumed.
1. However, some cultural historians trace back the history of Green tea as far as 3000 years ago when fresh tea leaves were chewed and eaten by the people because of their good experience they decided to grow it all over Southeast Asia. (Imai et al., 1997)
2. Formalized “tea ceremonies” took shape and tea drinking became very important in social life of people of China. It was during this era that the process of “steaming”the tea leaves was developed and refined. (Maeda et al., 2013)
3. Steaming – a method is much more universally associated with the production of Green tea. Steaming is the process of enzymatic oxidation– which causes the darkening of the tea leaves when they are added with hot water– and this allows the leaves to remain in natural “green” state.
4. Today, most high-quality Green teas are steamed and/or pan-fired – a technique where as thefresh Green teas are roasted in a large wok on high heat for a short period of time for extraction of leaves component into hot water.
5. Today, India has become one of the largest tea producers in the world, although about 70% of tea is consumed within India itself.
6. Again it also stands at the top 5 per-capita tea consumer and renowned teas such as assam and Darjeeling this are grown in India.
7. Tea production, certification, exportation, and all other facets which are important for trade in India that has been controlled by the Tea Board of India.
8. Country of origin is – china; region of origin is – East Asia 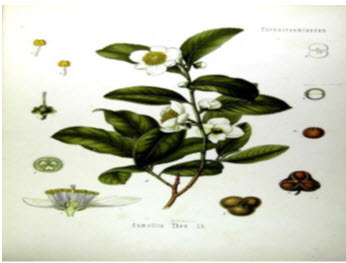 Camellia sinensis this belongs to Tibet, China, and Japan. Youngest leaves are delicately serrated, narrow, smooth with fine hairs, downy, and but slightly serrated. Its size is about 1-2 m tall and they are serrated, but venation little perceptible.  Leaves of medium and large sizes strongly, deeply, and widely serrated, with well-marked venation, and margin to the leaves are present, but they are thick and hard so it is difficult to identify veins in the lamina a series. The leaves are elliptic and it has obtuse end(Nagano et al., 2001). The Assam tea plant belongs to north east India. Odor is characteristic, taste is drying and astringent. This leaves have short hairs pointed and undivided.

Microscopic:
Transverse Section: (Saito et al., 2011)
1. The upper epidermis consists of cells with undulating walls and covered with thick cuticle and lower epidermis consists of smaller cells and provided with actinocyticstomata.
2. With the variety of tea and age of the leaf; they are unicellular, tapering and thick wall, varying in length of Greentea, but often attaining 500-700 microns.
3. The mesophyll is heterogeneous and asymmetrical. It is identified by the presence of a large number of sclerenchymatousidioblasts.They vary in shape and in thickness of the walls.
4. The cells of spongy parenchyma contain cluster crystals of calcium oxalate and midrib is biconvex. Under each epidermis there is a layer of collenchyma.
5. The wood is surrounded by a pericycle consisting of slightly lignified cells arranged in circle.
6. The little fragments of the stems, which are found in ordinary tea, they are slightly different in structure and it forms a circle within the pith containing branched idioblasts; these have comparatively thin, pitted walls.
7. Macroscopicand microscopic character analyzed by optical microscopy and fragments by scanning electron microcopy.

Types of green tea (Harold et al., 1992)
The types of green tea are classified on the basis of color of finished leaves, color of tea liquor and % of oxidation during processing. The chinese are the first people who has made many of the drinks according to that they had classified the tea into different types such as green tea, yellow tea, white tea, oolong tea, black tea, dark tea. Among this type of teas some of them are flavored, scented, aged, decaffeinated or ground etc. 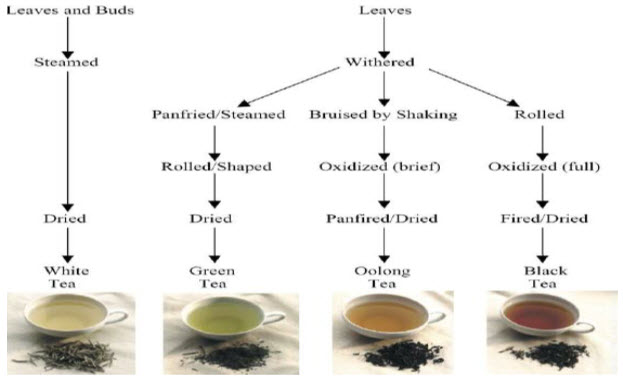 Green tea can improve brain function & make smarter:
Caffeine (stimulant) it produce a response without causing the “jittery”.
a. L-thiamineincreases the activity of the inhibitory neurotransmitter GABA and anti-anxiety effects.
b. Caffeine and L-thiamine can have synergistic effects. The combination of the two is potent for improving brain function.

Green tea increase fat burning and improves physical performance: (Laurie et al., 2005)
a. Fat burning and boost the metabolic rate.
b. Weight loss because of its thermogenic properties that promote oxidation.
c. Caffeine show to improve mobilizing of fatty acids from the fat tissues and used as energy.

Antioxidants used to lower risk of various types of cancer: (Proctor et al., 2005)
a. Cancer is caused by uncontrolled growth of cells leads to causes death and antioxidants give protective effect.
b. Green tea is an excellentsource of powerful antioxidants, so itreduce risk of cancer.

Green tea can kill bacteria, improves dental health and lower risk of infection:
a. Streptococcus mutantsare harmful bacteria which cause harm to mouth. It causes plaque formation and is a leading contributor to cavities and tooth decay.
b. Catechinscan inhibit the growth of streptococcus mutants.
c. It prevent strep throat and influenza and stop cavities

Green tea can help in weight loss: (Inoue  et al., 2011)
a.  Several studies show that green tea leads to decreases in body fat, especially in the abdominal area.
b. When there is accumulation of fat it is responsible to cause many diseases. 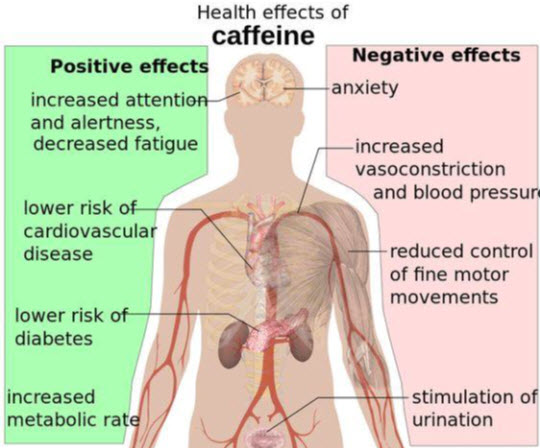