CHALLENGES FOR FDA WITH FOREIGN INSPECTIONS

As per analysis of United States Government Accountability Office (GAO), preliminary analysis of Food and Drug Administration (FDA) data shows that from fiscal year 2012 through 2016, the number of foreign drug manufacturing establishment inspections increased. From fiscal year 2016 through 2018, both foreign and domestic inspections decreased by about 10 percent and 13 percent, respectively.

Types of Inspection
Drugs manufactured overseas must meet the same statutory and regulatory requirements as those manufactured in the United States. FDA’s Center for Drug Evaluation and Research (CDER) establishes standards for the safety, quality, and effectiveness of, and manufacturing processes for, over-the-counter and prescription drugs. CDER requests that FDA’s Office of Regulatory Affairs (ORA) inspect both domestic and foreign establishments to ensure that drugs are produced in conformance with applicable laws of the United States, including current good manufacturing practice (CGMP) regulations.FDA investigators generally conduct three main types of drug manufacturing establishment inspections: preapproval inspections, surveillance inspections, and for-cause inspections, as described in below table. At times, FDA may conduct an inspection that combines both preapproval and surveillance inspection components in a single visit to an establishment.

FDA uses multiple databases to select foreign and domestic establishments for surveillance inspections, including its registration database and inspection database. Because the establishments are continuously changing as they begin, stop, or resume marketing products in the United States, CDER creates an establishment catalog monthly. The catalog is prioritized for inspection twice each year.

Post-Inspection Activities
FDA’s process for determining whether a foreign establishment complies with CGMPs involves both CDER and ORA. During an inspection, ORA investigators are responsible for identifying any significant objectionable conditions and practices and reporting these to the establishment’s management. Investigators suggest that the establishment respond to FDA in writing concerning all actions taken to address the issues identified during the inspection.

According to FDA policy, inspections classified as OAI may result in regulatory action, such as the issuance of a warning letter. FDA issues warning letters to those establishments manufacturing drugs for the U.S. market that are in violation of applicable U.S. laws and regulations and may be subject to enforcement action if the violations are not promptly and adequately corrected. In addition, warning letters may notify foreign establishments that FDA may refuse entry of their drugs at the border or recommend disapproval of any new drug applications listing the establishment until sufficient corrections are made. FDA may take other regulatory actions if it identifies serious deficiencies during the inspection of a foreign establishment. For example, FDA may issue an import alert, which instructs FDA staff that they may detain drugs manufactured by the violative establishment that have been offered for entry into the United States. In addition, FDA may conduct regulatory meetings with the violative establishment. Regulatory meetings may be held in a variety of situations, such as a follow-up to the issuance of a warning letter to emphasize the significance of the deficiencies or to communicate documented deficiencies that do not warrant the issuance of a warning letter. 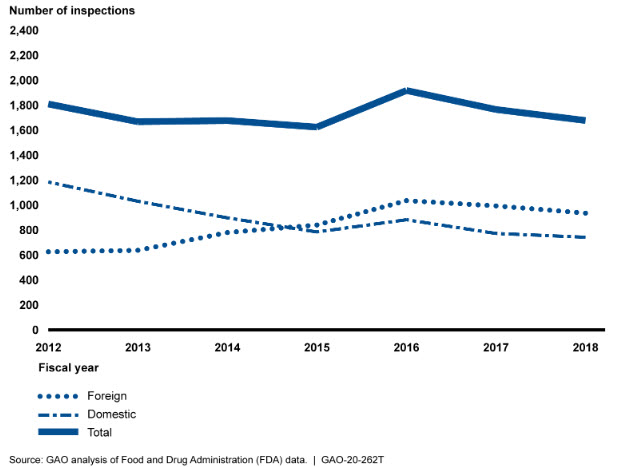 FDA continues to conduct the largest number of foreign inspections in India and China, with inspections in these two countries representing about 40 percent of all foreign drug inspections from fiscal year 2016 (when we last reported on this issue) through 2018.

Total number of FDA inspections other than USA

FDA Identified Deficiencies during the Majority of Foreign Inspections

serious deficiencies identified during foreign drug inspections classified as OAI—which represented 8 percent of inspections from fiscal year 2012 through 2018—include CGMP violations such as those related to production and process controls, equipment, records and reports, and buildings and facilities. For example:

• Failure to perform operations relating to the manufacture, processing, and packing of penicillin in facilities separate from those used for other drug products (21 C.F.R. § 211.42 (d) (2019)). At an establishment in Turkey that manufactured penicillin and other drugs, the investigator reported that the manufacturer had detected penicillin outside the penicillin manufacturing area of the establishment multiple times. According to FDA, penicillin contamination of other drugs presents great risk to patient safety, including potential anaphylaxis (even at extremely low levels of exposure) and death.

Language Barriers: FDA generally does not send translators on inspections in foreign countries. Rather, investigators rely on the pharma industries to provide translation services, which can be an English-speaking employee of the industry being inspected, an external translator hired by the industry, or an English-speaking consultant hired by the industry. This may not be big problem in India but it may be challenging in parts of Asia, including China and Japan.

Lack of Flexibility: There is little flexibility to extend foreign inspections conducted by domestically based investigators because the inspections they conduct on an overseas trip are scheduled back-to-back in 3-week trips that may involve three different countries.