A REVIEW ON PHARMACOLOGICAL ASPECTS OF TAGETES ERECTA LINN

ABSTRACT: Medicinal plants and derived medicine are widely used in traditional culture all over the world and they are becoming increasingly popular in modern society as natural alternatives to synthetic chemicals. Tagetes erecta Linn Known as “genda phool” (Marigold) belong to the family Astraceae, native to Mexico, Central America, Bolivia and Colombia. All parts of this plant used for medicinal purposes. It contained wide range of chemical constituents thiophenes, flavanoids, cartenoids, triterpenoids, oxycaroteniod and xanthophylls. This review article focus on the pharmacological actions like antibacterial, antifungal, antioxidant, hepatoprotective activity, wound healing property, cytotoxic and insecticidal activities. This review is a step to open insight for therapeutic efficacy of Tagetes erecta.

INTRODUCTION
Medicinal plants are considered as rich resources of ingredient which can be used in the drug development either phamacopoeial, non pharmacopoeial or synthetic drugs (Faizi et al., 2004). The name marigold is however indiscriminately applied to several genera of composite with golden or yellow capitula and there are about 33 species of the genus Tagetes, out of which, five species have been introduced into the Indian gardens viz. (Tagetes glandulifera schrank), Tagetes patula L. (French marigold) and Tagetes lucida (Sweet-Scented Marigold), Tagetes tenulifolia (striped Marigold) (Kokate 2005). Different parts of this plants including flower are used in folk medicine to cure various diseases such as fever, epileptic fits, astringent, carminative, stomachache, scabies, and liver complaints.  Leaves are also used as antiseptic, in kidney troubles, muscular pain and applied to boils and carbuncles (Kirtikar et al., 1997). Infusion of plant is used against rheumatism, cold and bronchitis (Sharma et al., 2007).

Plant Description
Marigold is a common garden plant which is rather coarse, erect, branched and grows to about 1 meter high. However there is short or dwarf varieties as well. The leaves are very deeply incised and sharply toothed. Flower heads are solitary, long stalked and thickening upward. The flowers are bright yellow, brownish-yellow or orange (Karwani and Sisodia, 2015).

Chemical Constituents
The plants T. Erecta has been shown to contain quercetagetin, a glucoside of quercitin, thienyl and ethyl gallate. Lutein is an oxycaroteniod or xanthophylls containing 2 cyclic end groups (one β one α- ionone ring) and the basic C-40 isoprenoid structure common to all cartenoids. It is one of the major constituent and the main pigment of Tagetes erecta (Ghani 1998).

Anguina tritici (kumari et al., 1986).
The essential oil from the fresh and dried plant of Tagetes erecta were reported to be highly effective against the larvae of Anopheles stephensi with the LC50 values of 1.0532 and 1.0314 mg/L (Hadjiakhoondi et al., 2008) . The essential oils of aerial parts of Tagetes erecta showed considerable cytotoxicity against Artemia salina with ED50 value of 3.16mg/mL (De Feo et al, 2005).While the dichloromethane and methanolic extracts of the aerial parts of the plant from Argentine were reported for significant insecticidal activity against Sitophilus oryzae (Broussalis et al., 1999).

Hepatoprotective activity
The hepatoprotective activity of flowers of Tagetes erecta by carbon tetrachloride induced hepatopathy model was determined. The CCL4 treated rats showed the increase in serum ALT, AST, ALP and bilirubin levels. Ethyl acetate fraction of Tagetes erecta (EATE) at the dose of 400 mg/kg orally significantly decreased the elevated serum marker enzymes and level of bilirubin almost to the normal level compared to the CCL4-intoxicated group. Historical changes in the liver of rats treated with 400 mg/kg of (EATE) extract and CCL4 showed a significant recovery except cytoplasmic vascular degenerations around portal tracts, mild inflammation and foci of lobular inflammation. Phytoconstituents such as flavanoids, terpenoids and steroids are responsible for the observed hepatoprotective activity (Giri et al., 2011).

Anti-bacterial Activity
The anti- bacterial activity of different solvents of Tagetes erecta flower show against Alcaligenes faecalis, Bacillus cereus, Campylobacter coli, Escherichia coli, klebisella pneumonia, streptococcus pyogens. The flavanoids petulitrin is one the potential elements for its anti bacterial activity (Sharma et al., 2011).
Nutrient agar medium was used for antibacterial assay and the inoculums was prepared by inoculating 0.2ml of overnight cultures of each organism into 20ml of sterile nutrient broth and incubated at 37°C for 3-5 hrs to standardize the culture to produce 106 cfu/ml. Antibacterial activity of the flavanoids (10 mg/100ml) was tested by disc diffusion assay Antibacterial activity of the flavanoids (10 mg/100ml) was higher for all the tested strains than that of the antibiotic tetracycline. Inhibition is maximum for Klebsiella pneumonia (29.50 mm) and minimum for Pseudomonas aeruginosa (21.00 mm) (Bauer et al., 1996).

Mosquitocidal activity
The Mosquitocidal activity in Ethanolic, chloroform and petroleum ether extracts of Tagetes erecta flower against different strains of Cx.quinquefasciatus. Among the tested samples the chloroform soluble fraction showed the highest toxicity and constituently the LC50 values (14.14 µg/mL, 1.706 µg/mL, 36.88 µg/mL and 75 µg/mL) and for all instars larvae of Cx.quinquefasciatus. The larvae showed comparative tolerance in the course of increasing age and time. From this they concluded that the flower of Tagetes erecta having good Mosquitocidal activity (Rahman et al., 2009).

Cytotoxic activity
Lutein was isolated from rhizomes of Tagetes erecta. The isolated pigments were quantified spectroscopically and separated by thin layer chromatography. The active components of the pigments were further purified and identified by high performance liquid chromatography. In vitro cytotoxic activity of extract against Hep2 cancer cell lines were evaluated. The activity sample showing cell viability of more than 97% at 0.078mg/ml were considered to be less which are most suitable to perform cytotoxic study (Niraikulam 2013).

Anti-epileptic activity
EtE of flowers of the Tagetes erecta is considered to be effective in the treatment of epilepsy as in Ayurveda, but the phytoconstituents in EtE devoid of anti epileptic activity, but they found with phytoconstituents which decreases seizures threshold such menthol, indole alkaloids and verbenone. Menthol is already providing to be proconvulsant in nature, indole alkaloids are CNS stimulants thus may reduce seizures threshold and verbenone is found to be antidepressant.
Tagetes erecta may have CNS stimulant property; may be due to the presence of indole as one of the major phytoconstituents. Due to the CNS stimulants and antidepressant property of the EtE; may decrease the seizures thresholds, it may cautious if used in epileptic patients (James et al., 1996).

Anti-inflammatory activity
Acute inflammation was produce by injecting 0.1ml of 1% of Carrageenan into the plantar surface of rat hind paw. The extract (100, 200 and 400mg/kg, orally) and phenylbutazone (PBZ, 100mg/kg, orally) as reference drug were administered 60 min. before carrageenan injection. The paw volume was measured at 0, 0.5, 1, 2, 3 and 4 pethysmometrically. The orally administered extract significantly reduces pain induced by acetic acid writhing response. The number of writhing reflexes in treated mice decreased significantly and was comparable to ASA. No significant change in thermal stimuli was found (Vogel 2002).
Antinociceptive activity
Tagetes erecta sixty minutes after extract administration 0.1 ml of 1% v/v acetic acid was injected. The number of abdominal contraction over a period of 20 min was noted. Acetylsalicylic acid (ASA, 100mg/kg, orally) was used as positive control. Significant reduction in the no. of abdominal contraction (p<0.05) compared to the control (that received 0.3 ml normal saline) was considered as Antinociceptive action (kulkarni et al., 2005).

Ovicidal and repellant activity
The ethyl acetate, acetone and methanol extract of Tagetes erecta leaves for oviposition- deterrent, Ovicidal and repellent activity against malaria vector, Anopheles subpictus grassi and emphasized on mosquito control facing a threat due to the emergence of resistance to synthetic insecticides and potential insecticides of plants origin which may serve as suitable alternative bicontrol techniques in the future (Elango et al., 2011). 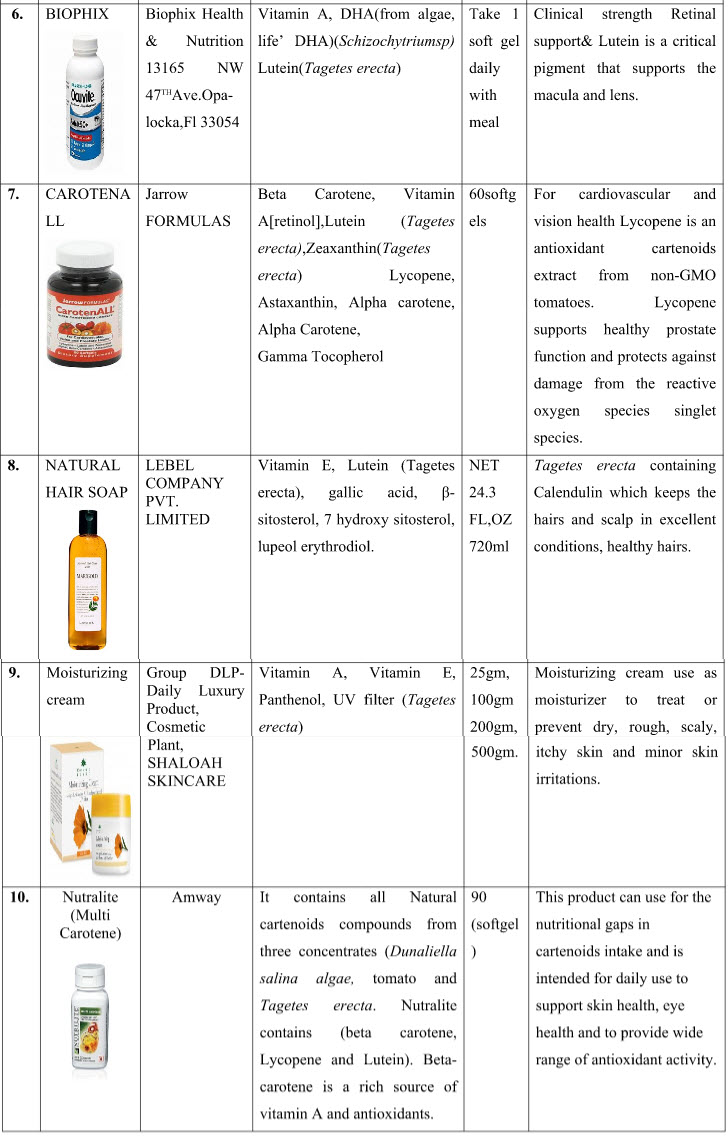 CONCLUSION
The detailed review on plant Tagetes erecta shows that as an herbal plant it offers a wide variety of pharmacological activities such as antimicrobial activity, wound healing activity, hepatoprotective activity, Mosquitocidal activity, antioxidant activity etc. Many Indian herbs are being used in traditional practices to cure various human ailments. Tagetes erecta has an important place among such anti- inflammatory medicinal plants; it can also be used in treating wound, cancer, liver disorder and diabetes. Furthermore, in future study, the isolated principles from Tagetes erecta needs to be evaluated in scientific manner using various innovative experimental models and clinical trials to understand its mechanism of action, in search of other active constituents, so that its other therapeutic uses can be widely explored. Therefore Tagetes erecta can be considered as a solution of several ailments and can be explored further.