Virus
“A virus is a small infectious agent that can replicate only inside the living cells of an organism. That can infect all types of organisms, from animals and plants to bacteria and archaea. ”

The word virus is from the Latin virus referring to poison and other noxious substances, first used in English in 1392. Virulent, from Latinvirulentus (poisonous), dates to 1400. A meaning of "agent that causes infectious disease" is first recorded in 1728, before the discovery of viruses by Dmitri Ivanoncolytic virusesky in 1892. The plural is viruses. The adjective viral dates to 1948.The term virion (pluralvirions), which dates from 1959,is also used to refer to a single, stable infective viral particle that is released from the cell and is fully capable of infecting other cells of the same type.

Virus particles (known as virions) consist of two or three parts: the genetic material made from either DNA or RNA, long molecules that carry genetic information; a protein coat that protects these genes; and in some cases an envelope of lipids that surrounds the protein coat when they are outside a cell. The shapes of viruses range from simple helical and icosahedral forms to more complex structures. The average virus is about one one-hundredth the size of the average bacterium. Most viruses are too small to be seen directly with an optical microscope.

The origins of viruses in the evolutionary history of life are unclear: some may have evolvedfrom plasmids – pieces of DNA that can move between cells – while others may have evolved from bacteria. In evolution, viruses are an important means of horizontal gene transfer, which increases genetic diversity

Viruses spread in many ways; viruses in plants are often transmitted from plant to plant by insects that feed on plant sap, such as aphids; viruses in animals can be carried by blood-sucking insects. These disease-bearing organisms are known as vectors. Influenza virusesare spread by coughing and sneezing. Norovirus and rotavirus,common causes of viral gastroenteritis, are transmitted by the faecal-oral route and are passed from person to person by contact, entering the body in food or water. HIV is one of several viruses transmitted through sexual contact and by exposure to infected blood. The range of host cells that a virus can infect is called its "host range". This can be narrow or, as when a virus is capable of infecting many species, broad.

Viral infections in animals provoke an immune response that usually eliminates the infecting virus. Immune responses can also be produced by vaccines, which confer an artificially acquired immunity to the specific viral infection. However, some viruses including those that cause AIDS and viral hepatitis evade these immune responses and result in chronic infections. Antibiotics have no effect on viruses, but several antiviral drugs have been developed.[8]

The genome of the virus is surrounded by a protein coat known as a capsid, which is formed from a number of individual protein molecules called capsomeres. Capsomeres are arranged in a precise and highly repetitive pattern around the nucleic acid. A single type of capsomere or several chemically distinct types may make up the capsid. The combination of genome and capsid is called the viral nucleocapsid.

A number of kinds of viruses contain envelopes. An envelope is a membranelike structure that encloses the nucleocapsid and is obtained from a host cell during the replication process. The envelope contains viral-specified proteins that make it unique. Among the envelope viruses are those of herpes simplex, chickenpox, and infectious mononucleosis.[10]

DNA viruses:
The genome replication of most DNA viruses takes place in the cell's nucleus. If the cell has the appropriate receptor on its surface, these viruses enter the cell sometimes by direct fusion with the cell membrane (e.g., herpesviruses) or – more usually – by receptor-mediated endocytosis. Most DNA viruses are entirely dependent on the host cell's DNA and RNA synthesising machinery, and RNA processing machinery; however, viruses with larger genomes may encode much of this machinery themselves. In eukaryotes the viral genome must cross the cell's nuclear membrane to access this machinery, while in bacteria it need only enter the cell.

RNA viruses:
Replication usually takes place in the cytoplasm. RNA viruses can be placed into four different groups depending on their modes of replication. The polarity (whether or not it can be used directly by ribosomes to make proteins) of single-stranded RNA viruses largely determines the replicative mechanism; the other major criterion is whether the genetic material is single-stranded or double-stranded. All RNA viruses use their own RNA replicase enzymes to create copies of their genomes.

Reverse transcribing viruses:
These have ssRNA (Retroviridae, Metaviridae, Pseudoviridae) or dsDNA (Caulimoviridae, and Hepadnaviridae) in their particles. Reverse transcribing viruses with RNA genomes (retroviruses), use a DNA intermediate to replicate, whereas those with DNA genomes (pararetroviruses) use an RNA intermediate during genome replication. Both types use a reverse transcriptase,or RNA-dependent DNA polymerase enzyme, to carry out the nucleic acid conversion. Retroviruses integrate the DNA produced by reverse transcription into the host genome as a provirus as a part of the replication process; pararetroviruses do not, although integrated genome copies of especially plant pararetroviruses can give rise to infectious virus. They are susceptible to antiviral drugs that inhibit the reverse transcriptase enzyme, e.g.  zidovudine and lamivudine. An example of the first type is HIV, which is a retrovirus. Examples of the second type are the Hepadnaviridae, which includes Hepatitis B virus.

,  any of a group of ribonucleic acid (RNA) viruses constituting the family- Reoviridae, a small group of animal and plant viruses. The virions of reoviruses (the name is a shortening of respiratory enteric orphan viruses) lack an outer envelope, appear spheroidal, measure about 70 nanometres (nm; 1 nm = 10-9 metre) across, have two icosahedral capsids, and contain a core of segmented, double-stranded RNA. Characteristic features of structure, preferred hosts, and chemistry are the basis for dividing reoviruses into several genera, of which Orthoreovirus, Orbivirus, Rotavirus, andPhytoreovirusare among the best known. Although orthoviruses have been found in the respiratory and enteric tracts of animals, they are not generally pathogenic in adults. Some orbiviruses cause disease in mammals (for example, blue-tongue disease in sheep); rotaviruses have been implicated in infective infantile diarrhea; and phytoreoviruses can destroy rice, corn, and other crops) 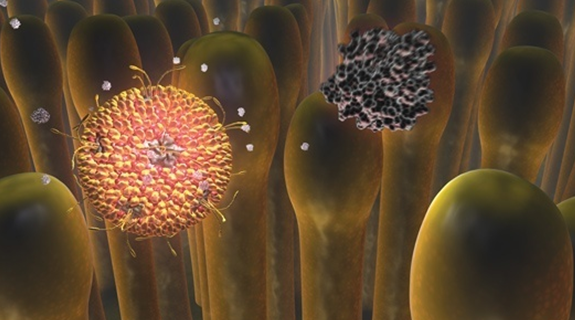 Adenoviruses-[13]
Adenoviruses are medium-sized (90–100 nm), nonenveloped (without an outer lipid bilayer) icosahedral viruses composed of a nucleocapsid and a double-stranded linear DNA genome. There are 57 described serotypes in humans, which are responsible for 5–10% of upper respiratory infections in children, and many infections in adults as well. Viruses of the family Adenoviridae infect various species of vertebrates, including humans. Adenoviruses were first isolated in 1953 from human adenoids. They are classified as group I under the Baltimore classification scheme, meaning their genomes consist of double stranded DNA. Adenoviruses represent the largest nonenveloped viruses. Because of their large size, they are able to be transported through the endosome (i.e., envelope fusion is not necessary). The virion also has a unique "spike" or fiber associated with each penton base of the capsid (see picture below) that aids in attachment to the host cell via the coxsackie-adenovirus receptor on the surface of the host cell.

In 2010, scientists announced that they had solved the structure of the human adenovirus at the atomic level, making the largest high-resolution model ever. The virus is composed of around 1 million amino acid residues and weighs around 150 MDa

The adenovirus genome is linear, non-segmented double-stranded (ds) DNA that is between 26 and 45 Kbp. This allows the virus to theoretically carry 22 to 40 genes. Although this is significantly larger than other viruses in its Baltimore group, it is still a very simple virus and is heavily reliant on the host cell for survival and replication. An interesting feature of this viral genome is that it has a terminal 55 kDa protein associated with each of the 5' ends of the linear dsDNA. These are used as primers in viral replication and ensure that the ends of the virus' linear genome are adequately replicated. 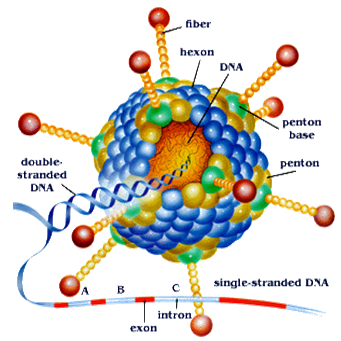 Herpes simplex virus-[14]
Herpes simplex virus 1 and 2 (HSV-1 and HSV-2), also known as Human herpes virus 1 and 2 (HHV-1 and -2), are two members of the herpes virus family, Herpesviridae, that infect humans.[1] Both HSV-1 (which produces most cold sores) and HSV-2 (which produces most genital herpes) are ubiquitous and contagious. They can be spread when an infected person is producing and shedding the virus. Symptoms of herpes simplex virus infection include watery blisters in the skin or mucous membranes of the mouth, lips or genitals. Lesions heal with a scab characteristic of herpetic disease. Sometimes, the viruses cause very mild or atypical symptoms during outbreaks. However, as neurotropic and neuroinvasive viruses, HSV-1 and -2 persist in the body by becoming latent and hiding from the immune system in the cell bodies of neurons. After the initial or primary infection, some infected people experience sporadic episodes of viral reactivation or outbreaks. In an outbreak, the virus in a nerve cell becomes active and is transported via the neuron's axon to the skin, where virus replication and shedding occur and cause new sores. 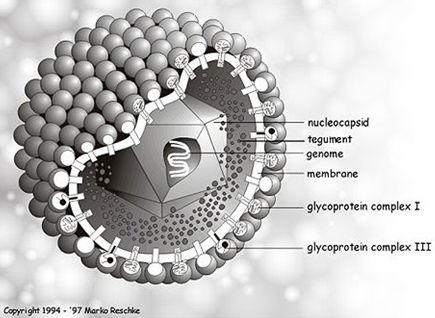 Vesicular stomatitis virus [15]
A member of the rhabdoviridae family, vesicular stomatitis virus (VSV) is a negative sense single-stranded RNA virus that is highly sensitive to the antiviral IFN response. This acute sensitivity to IFN-induced changes effectively blocks infection of the virus in normal cells. It also makes the virus an ideal naturally oncolytic agent as cancer cells often have a eregulated IFN response, allowing for uninhibited VSV replication. In addition, tumor cells with defects in Ras, p53 or Myc signaling pathways have been shown to be permissive to VSV. VSV is an animal pathogen, which can also infect humans. In humans, VSV infections are usually asymptomatic, but it can cause flu-like symptoms, raising some concern about using the virus as a cancer therapeutic in its naturally isolated state. Because the original observations that a laboratory VSV isolate (strain Indiana) efficiently infects and kills tumor cells in vitro and in vivo, natural mutants and engineered versions have been isolated with improved oncolytic cancer-killing capabilities and tumor specificity. For example, the HSV thymidine kinase gene has been incorporated into the VSV genome. This suicide cassette is designed to enhance killing of VSV-infected tumor cells and also uninfected neighboring tumor cells through the “bystander effect.” In another example, interleukin-4 cDNA was incorporated into the VSV genome in order to enhance anti-tumor immunity. Using an antibody binding domain, Bergman et al. engineered a VSV variant that could arget Her2/neu overexpressing cells, which is most typical of breast cancers and plays an important biologic role in breast CICs. Naturally isolated VSV variants AV1 and AV2 have mutated matrix (M) proteins (responsible for blocking IFN induction in infected cells),  and are further attenuated for replication in normal cells but still retain full cancer-killing ability. This finding led to engineered versions such as recombinant VSV ΔM51, which has reduced toxicity but is highly effective at targeting various primary and metastasized tumors in vivo. Numerous studies have convincingly shown the ab