MECHANISMS OF ENHANCEMENT OF SOLUBILITY AND BIOAVAILABILITY
Several mechanisms of enhanced drug release have been postulated for liquisolid systems (Saharan, 2009). The three main proposed mechanisms include increased surface area of drug available for release, increased aqueous solubility of the drug due to presence of non-volatile vehicle and improved wettability of the drug particles due to co solvent effect of the vehicle used.

Increased Effective Surface Area
If the drug within the liquisolid system is completely dissolved in the liquid vehicle, it is located in the powder substrate still in a solubilized and molecularly dispersed state. Therefore, the surface area of drug available for release is much greater than that of drug particles within directly compressed tablets. Accordingly, with increasing drug content exceeding the solubility limit and thus, increasing fraction of undissolved drug in the liquid vehicle the release rate decreases. With various drugs it could be shown that the release rates are directly proportional to the fraction of the molecularly dispersed drug (FM) in the liquid formulation. FM is defined by Spireas as the ratio between the drug's solubility (Sd) in the given liquid vehicle and the actual drug concentration (Cd) in this vehicle carried by each system. Therefore,

In addition it is thought that the adsorption and absorption of molecularly dispersed drug onto the surface and interior of the carrier particles impart increased effective surface area available for the mass transfer during the drug dissolution process.

Improved Wetting Properties
Due to the fact that the liquid vehicle can either act as surface active agent or has a low surface tension, wetting of the primary liquisolid particles is improved. 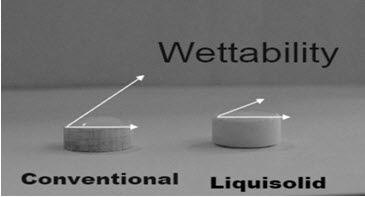 Wettability of these systems can be demonstrated by contact angles and water rising times. Also the adsorption of the drug on the carrier particles increases the effective surface area, improving the contact of drug and wettability.

•  Drug can be molecularly dispersed in the formulation.
• Capability of industrial production is also possible.
• Enhanced bioavailability can be obtained as compared to conventional tablets.
• Several slightly and very slightly water-soluble and practically water-insoluble liquid and solid drugs can be formulated into liquisolid systems (Dokoumetzidis and Macheras, 2006)
• Even though the drug is in a tablet or capsule form, it is held in a solubilised liquid state, which contributes to increased drug wetting properties, thereby enhancing drug dissolution.
• Rapid release liquisolid tablets or capsules of water insoluble drugs exhibit enhanced In-vitro and in-vivo drug release when compared to their commercial counter parts, including soft gelatin capsules preparation. (Nagabandi et al., 2011)
• Sustained release liquisolid tablets or capsules of water insoluble drugs exhibit constant dissolution rates (zero-order release) comparable only to expensive commercial preparations that combine osmotic pump technology and laser-drilled tablets.
• Better availability of an orally administered water insoluble drug.
• Production of liquisolid systems is similar to that of conventional tablets.
• Can be used for formulation of liquid oily drugs.
• Can be used in controlled drug delivery.

LIMITATIONS
• Not applicable for formulation of high dose insoluble drugs.
•  If more amount of carrier is added to produce free-flowing powder, the tablet weight increases to more than one gram which is difficult to swallow.
• Acceptable compression properties may not be achieved since during compression liquid drug may be squeezed out of the liquisolid tablet resulting in tablets of unsatisfactory hardness.

ORODISPERSIBLE TABLETS
The US Food and Drug Administration Center for Drug Evaluation and Research (CDER) defines, in the ‘Orange Book’, an ODT as “a solid dosage form containing medicinal substances, which disintegrates rapidly, usually within a matter of seconds, when placed upon the tongue”. The significance of these dosage forms is highlighted by the adoption of the term, “Orodispersible Tablet”, by the European Pharmacopoeia which describes it as a tablet that can be placed in oral cavity where it disperses rapidly before swallowing.

DRUG SELECTION CRITERIA FOR ODTs
• Able to saturate the oral mucosa.
• At least moderately non-ionized at oral cavity pH.
• Have the ability to diffuse and partition into the epithelium of upper GIT.
• Small to moderate molecular weight
• Low dose drugs mostly less than 50 mg.
• Should have good stability in saliva and water.
• Drugs with lower bio availability are good candidates for ODT.
• Frequent dosing drugs are unsuitable for ODT.

CHALLENGES AND LIMITATIONS FOR ODTs
• Drugs with relatively larger doses are difficult to formulate into ODTs e.g. antibiotics like ciprofloxacin with adult dose tablet containing about 500 mg of the drug (Velmurugan and Vinushitha, 2010).
• Mechanical strength - ODTs are made of porous or soft molded matrices in order to allow its disintegration in mouth. This makes tablet friable and handling becomes difficult.
• Orodispersible tablets with highly porous structure and good mechanical strength have been developed by sublimation method.
•  Palatability - ODTs are intended to be dissolved in mouth. Most of the drugs have bitter taste. Bitter taste can be masked with enough sweetener and flavors.
•  Drugs in form of ODTs are hygroscopic in nature and hence need to be protected from humidity (Kumar et al., 2012). To overcome humidity problem special working facilities can be designed by simple methods and special air-conditioning systems can be set up.
• Size of tablet -7mm is easy to swallow while tablets of size 8mm are easy to handle. Hence, tablet sizes which are both easy to handle and swallow are difficult to achieve. For the patient compliance, to make the swallowing easier, round shape punches having optimum dimensions are used.
•  Drug candidates should be stable both in water and in saliva, should not ionize at oral cavity pH and should be able to permeate oral mucosal tissue to diffuse and partition in upper GI epithelium (logP > 1, or preferably > 2, should not have short half-life). To optimize solubility problem of the active pharmaceutical ingredient some solid buffers and surfactants can also be chosen.
• ODT requires special packaging for proper stabilization and safety of stable product (Reddy et al., 2012)

ADVANTAGES
1. Administration to the patients who cannot swallow, such as the elderly, stroke victims, bedridden patients, patients affected by renal failure & patients who refuse to swallow such as paediatric, geriatric & psychiatric patients (Shu T, 2002)
2. Rapid drug therapy.
3. Increased bioavailability/rapid absorption through pregastric absorption of drugs from mouth, pharynx & oesophagus as saliva passes down (Chang et al., 2002)
4. Better patient compliance for disabled, bedridden patients, travellers and busy people, who do not always have access to water.
5. Good mouth feel property helps to change the perception of medication as bitter pill particularly in paediatric patients.
6. The risk of chocking during oral administration of conventional formulations due to physical obstruction is avoided, thus providing improved safety.

METHOD OF PREPARATION OF ORODISPERSIBLE LIQUISOLID SYSTEM
As shown in figure-3, a liquid drug can be converted into a dry liquisolid system without being further chemically modified. If liquisolid system of a solid water-insoluble drug is to be formulated, it should be initially dissolved or suspended in a suitable non-volatile solvent system to produce a drug solution or drug suspension of desired concentration (Hamsanandini et al., 2015)

Next, a certain amount of the prepared drug solution or suspension or a liquid drug itself is incorporated into a specific quantity of carrier material which should be preferably of a porous nature and possessing sufficient absorption properties.

The resulting wet mixture is then converted into a dry, non adherent, free-flowing and readily compressible powder by the simple addition and mixing of a calculated amount of coating material

Excipients possessing fine and highly adsorptive particles are suitable for this step. Before compression or encapsulation, various adjuvants like lubricants and super-disintegrants added to final liquisolid system to produce orodispersible liquisolid compacts. 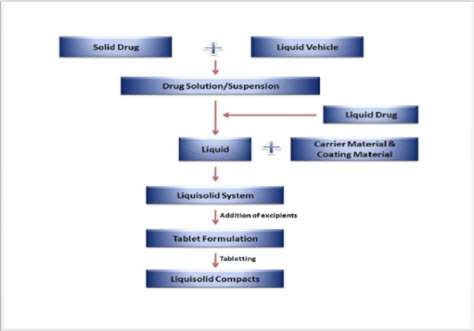 FIG-3: STEPS INVOLVED IN THE PREPARATION OF LIQUISOLID SYSTEM

PRE-FORMULATION STUDIES
1. Solubility studies
Solubility studies are carried out by preparing saturated solutions of drug in non-volatile solvent and analyzing them spectrophotometrically. Saturated solutions are prepared by adding excess of drug to non volatile solvent and shaking them on shaker for specific time period under constant vibration. After this, the solutions are filtered and analyzed spectrophotometrically (Spireas and Sadu, 1998)

3. Determination of flowable liquid retention potential (Φ-value)
The term "flowable liquid- retention potential" (Φ-value) of a powder material describes its ability to retain a specific amount of liquid while maintaining good flow properties (Spireas and Bolton, 1999). The Φ-value is defined as the maximum weight of liquid that can be retained per unit weight of the powder material in order to produce an acceptably flowing liquid/powder admixture. The Φ values are calculated according to equation
Φ value = weight of liquid / weight of solid … (5)

4. Calculation of liquid load factor (Lf)
Different concentrations of non-volatile solvents are taken and the drug is dissolved. Such liquid medication is added to the carrier-coating material admixture and blended (Spireas, 2002). Using equation (6) drug loading factors are determined and used for calculating the amounts of carrier and coating materials in each formulation.
Lf = weight of liquid medication / weight of carrier material… (6)